After Public Outrage, PA Says Blocking Report Was a “Mistake”

Posted on October 7, 2009 by wallwritings 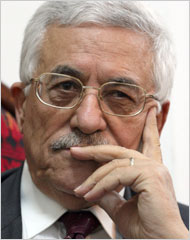 The Palestinian leadership made a mistake by suspending action on a U.N. report on Gaza war crimes, a member of President Mahmoud Abbas’ inner circle said Wednesday – the first such acknowledgment after days of protests in the West Bank and Gaza. . . .

Excerpts from the Ha’aretz story:

Abbas made the [original decision to postpone consideration of the Report] under heavy U.S. pressure, Palestinian and Israeli officials have said. U.S. officials told Palestinian leaders that a war crimes debate would complicate efforts to restart Israeli-Palestinian peace talks, according to participants in such meetings.

Abbas’ aides have defended the step, saying the Palestinians needed more time to win international support for the U.N. report. They said deferring action did not mean burying the report. But Abbas apparently underestimated the angry response at home.

With every day, there were more protests, marches and statements of condemnations, not only from his Hamas rivals, but also from human rights groups and intellectuals.

On Wednesday, senior Abbas adviser Yasser Abed Rabbo told the Voice of Palestine radio that the Palestinian leadership had erred. “What happened is a mistake, but [it] can be repaired,” said Abed Rabbo, secretary general of the Palestine Liberation Organization. “We have the courage to admit there was a mistake.”

In Gaza, public outrage at Abbas reached a new level on Wednesday, when hundreds of posters criticizing the Palestinian president appeared in public areas around Gaza City. Abbas and Hamas have been bitter rivals since the Islamic group violently seized control of Gaza from pro-Abbas forces in June 2007. . . . . . .

On Tuesday, a close associate of Abbas told Haaretz that if Israel does not soften its positions on the peace process, the Palestinian Authority will resume pushing to get the Goldstone report moved to the Security Council, and thence to the International Criminal Court. . . .

Chief Palestinian negotiator Saeb Erekat told the French media Tuesday that Abbas is now considering asking Arab states to raise the Goldstone report in the Security Council themselves. Erekat also threatened to reveal the names of all the countries that pressured Abbas to pull the motion and instead negotiate with Israel without preconditions. . . .

On Monday, Palestinians poured into the streets of Ramallah to protest their government initial decision to “postpone” any action on the Goldstone Report.

The protests came as a surprise to the Palestinian leaders. Over the week-end Karin Laub (Associated Press) described Abbas as rushing “to limit the fallout from his decision”.

What led Abbas to make such a mistake? Is he that removed from the Palestinian people not to be aware that rejecting the Report would have a negative impact?

The Sabeel Ecumenical Liberation Theology Center, based in Jerusalem, issued a statement September 30, which began with a prophetic warning about present conditions in the Occupied Territories. (The statement is being distributed to a wide audience in the US by Friends of Sabeel North America (FOSNA).)

The situation in the Occupied Territories, including the Gaza Strip and East Jerusalem, is dire and desperate. Israel continues to jeopardize any opportunity for a peaceful negotiated settlement by creating facts on the ground in defiance of the international community.

It is becoming increasingly clear that Israel has already finalized its intended objectives in the Occupied Territories and has a blueprint for a final resolution of the conflict, which it aims to achieve unilaterally. . . .

The Sabeel statement concluded by denouncing the decision of the Palestinian Authority to postpone further attention to the Goldstone Report:

Sabeel strongly denounces the postponement of the discussion of the Goldstone Report on Israel’s war on Gaza, at the UN Human Rights Council in Geneva. The report must be followed up, Justice must take its course and the guilty must not get away with impunity. (To read the full Sabeel Statement, “Choose Life”, click here.)

President Abbas has lost the respect of  his public by allowing his actions to be dictated  by the US and Israel. As Ha’aretz columnist Amira Hass reported, Abbas decided to postpone consideration of the Goldstone Report after he met in Ramallah with the American consul-general.

In a single phone call to his man in Geneva, Mahmoud Abbas has demonstrated his disregard for popular action, and his lack of faith in its accumulative power and the place of mass movements in processes of change.

For nine months, thousands of people – Palestinians, their supporters abroad and Israeli anti-occupation activists – toiled to ensure that the legacy of Israel’s military offensive against Gaza would not be consigned to the garbage bin of occupying nations obsessed with their feelings of superiority. Thanks to the Goldstone report, even in Israel voices began to stammer about the need for an independent inquiry into the assault.

But shortly after Abbas was visited by the American consul-general on Thursday, the leader of the Palestine Liberation Organization got on the phone to instruct his representative on the United Nations Human Rights Council to ask his colleagues to postpone the vote on the adoption of the report’s conclusions.

Such a meeting would not have taken place without direct orders from the Obama White House, where Obama’s advisors continue to show little sensitivity to the deep resentment the Palestinian public justifiably harbors toward the Israeli government that conducted such a brutal three-week invasion of Gaza earlier this year.

President Obama’s image in the Middle East has been badly battered by his mishandling of the Goldstone Report, a 500-page carefully-documented report that was written under the direction of Richard Goldstone, a South African Jewish judge.

Obama did more than make his own mistake in rejecting the Report. He also forced Mahmoud Abbas to follow Obama’s order to postpone UN consideration of the Goldstone Report.

What is the impact on Abbas’ standing within the West Bank and Gaza?

A leading Palestinian journalist, Rami Khouri, has called on Abbas to resign. Before news broke that PA officials had acknowledged  that Abbas made a “mistake”,Khouri wrote in the Beruit Daily Star:

In one move Abbas can help rebuild the credibility of the Palestinian presidency while simultaneously strengthening overall Palestinian national unity and political cohesion.

He should simply call early elections for the Palestine Authority presidency, not stand as a candidate, and instead devote time to using his other position as head of the Palestinian Liberation Organization’s Executive Committee to achieve a critical need absent from Palestinian life for decades: namely, building a national consensus by giving voice to all groups of Palestinians and especially to refugees living in camps throughout the Middle East.

Khouri describes the Goldstone Report as a missed opportunity for President Abbas:

Here was a rare case of a credible international judge making strong accusations against both Israel and Hamas, and suggesting that their conduct be considered by the UN Security Council.

It was an opportunity to bring pressure to bear on Israel through the institutions of the United Nations. However, Abbas caved in to US pressure, making it clear that he was more concerned about his relations with Washington than relations with, well, his own people.

Khouri recalls Abbas’ years of service in the Palestine cause and concludes:

Abbas is a spent force, lacking both serious legitimacy and perceptible impact. He hangs on to some thin threads of credibility from his long association with Yasser Arafat and the Fatah leadership from the days when they represented a Palestinian national strategy, and mattered because they retained some self-respect. Sadly, this is no longer the case.

Khouri acknowledges the deep Palestinian split between Hamas and Fatah, but he points out:

There is still a national consensus that all Palestinians agree on, as expressed in the seminal Prisoners’ Document that came out of the agreement a few years ago among leading Palestinian factions who negotiated it during their stay in Israeli jails.

Looking to a post-Abbas future, Khouri sees an opportunity for Abbas to redeem himself:

Mahmoud Abbas has failed his people, but he can partially redeem himself and set the stage for his successor to play a more effective role. He should act with honor and confidence by stepping down as Palestinian president, calling a new election to bring in a more legitimate and capable leadership, and focusing his energy on where he started his days decades ago when he still had credibility and courage – by reconstituting the PLO as the coordinating body for all Palestinians.

Khouri has the credentials to call on Abbas to resign. He is currently Director of the Issam Fares Institute of Public Policy and International Affairs at the American University of Beirut as well as editor-at-large of the Daily Star. In October, 2006, he was a visiting scholar at Stanford University, and in November 2006, he was the co-recipient of the Pax Christi International Peace Award for his efforts to bring peace and reconciliation to the Middle East.

Obama is surrounded by staff members who are strong supporters of Israel.  He is smart enough to recognize that, like Abbas, he also made a mistake, not only by rejecting the Goldstone Report, but by believing he could operate in the Middle East with no Palestinian input into his decision-making.

I am sure he will be happy to talk with you. I am also confident he has Rami Khouri’s Beruit number.

Both men will tell you that Palestinian leaders expect to be treated with the same respect you give other world leaders.

Picture above of President Abbas is by George Azar, from the New York Times

4 Responses to After Public Outrage, PA Says Blocking Report Was a “Mistake”