NYT to Obama v. Romney, “let’s you and him fight”

Posted on September 30, 2012 by wallwritings 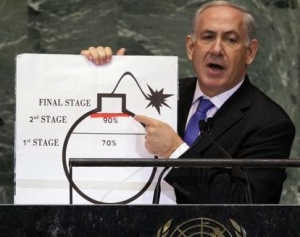 The New York Times must have gone into a panic mode for its editors to set Shane loose on such a comparison. There is a good reason for that panic.

Polls show that, especially in crucial swing states, President Obama’s lead is increasing over his challenger, Mitt Romney. Even Benjamin Netanyahu (above, during his UN speech) has thrown in the towel, promising to hold off his attack on Iran until after the election.

The Times hit the panic button not because it wants Romney to win. What frightens the Times is the same realization that hits sports editors when a football team loses both its star quarterback and leading receiver just before the Super Bowl.

A month is a long time to cover a political fight when the outcome is already determined. What to do? What is a profit-oriented publication giant to do with all those political news pages to fill?

Not to worry, the Times knows narratives can be generated. It also knows the best narrative is the conflict narrative. As the old city editor always said, “conflict is what sells papers, kid, never forget that.”

So it is that the Times looks for ways to instruct candidates Barack Obama and Mitt Romney, “let’s you and him fight”. That old saying just happens to be the title of a great old movie cartoon starring Popeye (shown at left) during which Popeye’s faithful girl friend, Olive Oyl, knowing Popeye is doomed to lose, reaches for Popeye’s main source of energy, a can of spinach.

Olive Oyle races to the boxing ring where Popeye is down for the count. She gives him his spinach, which, of course, brings him to life and gives him strength. Take a look at the six minute video to see Popeye and Olive Oyl in action:

What can the Times do to generate a fight in the political ring even though every political signal says, it’s over? Simple, just bring on the spinach.

Ignoring the polls that show the race virtually over, the Times sends Scott Shane to ringside, with his can of spinach, which is a story that links Obama to Carter as a one-term president. Never mind that the linkage is spurious and unfaithful to history. No one believes that spinach has that much energy-producing power, either. It is the story that matters.

The Times can tolerate a spurious comparison, so long as it brings life back into the fight. Scott Shane, begins his spinach story with the always useful, alarming phrase, he tells us a president is “struggling”.  Hey, everybody, listen up, the game is still on.

The Times, like the Broadway gamblers in Guys and Dolls, led by Nathan Detroit, (played in the movie by Frank Sinatra ), has been pleading, we “gotta have  a game, or we’ll die from shame”. Now the Times has its game:

A president struggling simultaneously to cope with anti-American tumult in the Middle East and fix stubborn economic trouble at home: Is President Obama replaying the one-term presidency of Jimmy Carter?

So Mitt Romney and Paul D. Ryan have repeatedly suggested, trying to use the glum precedent of the Carter presidency to taint Mr. Obama’s record and produce the same electoral result 32 years later.

Perhaps a copy editor intervened, causing Shane to quickly acknowledge the weakness of his “fight” narrative with this substantial disclaimer: ‘But many of the details differ, and some tilt decisively in Mr. Obama’s favor, both factually and politically.”

“Carter was dour, inward-looking, suspicious by nature. Obama’s not. Despite presiding over a terrible economy, Obama has remained pretty popular personally.”

Hey, I was an “operative” in that 1980 Jimmy Carter campaign, a small operative, to be sure. Shane’s unnamed “historians” would insist I admit that major decisions in the campaign were not made at the Illinois state level, where I was Carter’s campaign manager.

But I did know Jimmy Carter well. I knew then he was not, and is not now, “dour, inward-looking, suspicious by nature”. For the record, having known my fellow Georgian since 1974, I will testify that Carter was then, and is now, warm, out-going, and properly suspicious, by nature, of journalists and politicians who try to impose their own narratives on him.

(Memo to Scott Shane, if you ever need a quote from a low-level Carter operative from the 1980s, give me a call. I’m in the phone book.)

“What defeated Carter, was the public’s sense that he couldn’t handle the job. That’s the point Romney and Ryan and are trying to make about Obama — that however nice a guy he may be, he’s in over his head.”

Shane defends the Romney-Ryan case by using flimsy evidence which any Carter “operative” from the 1980 campaign, could have quickly refuted. Shane is repeating political tropes that have calcified into gospel truths, such as “in over his head”. What president is not “in over his head”. They all are. The job is too large and the chaos too overwhelming in any era, for any single individual to claim otherwise.

All each president can do it cope with the task at hand, a task that always includes having to deal with politicians ready to deal with anyone who will help them win a political fight.

To his credit, Shane brings in an historian who is willing to be quoted, to make the case that Jimmy Carter was capable of dealing firmly with an enemy who was holding American citizens as hostages in Teheran, Iran.

David Patrick Houghton, a political scientist at the University of Central Florida and author of a book on the Iran hostage crisis, said the Carter comparisons were “mostly unfair” — both to Mr. Carter and Mr. Obama. He singled out as “utterly false” Mr. Romney’s claim that Mr. Reagan’s tough reputation caused Iran to release the American hostages just as he became president; in fact, the Carter administration had negotiated their release.

“This campaign has become a kind of opportunity to fling around bogus history,” he said.

Romney’s claim is, indeed, “utterly false”, when he claims, “Reagan’s tough reputation caused Iran to release the American hostage just as he became president”. The release of the hostages on Reagan’s inauguration morning is also believed to have been part of a deal arranged by Reagan operatives to reach an agreement with the Iranian government that it would hold the hostages until after the election. For more on this deal, see Gary Sick’s detailed account of the events surrounding the delay of the release of the hostages in 1981, in his book, October Surprise.

As Historian Houghton noted, the Iranians had earlier agreed with Carter, after lengthy negotiations, that they would release the hostages. All that was left was a decision on the timing of the release. A pending timing decision was too tempting to duplicitous politicians not to negotiate their own side deal.

Together the Iranians and the Reagan operatives agreed on a “deal” which led to a delay in the release of the hostages until after the election. Many analysts agree that particular deal with the enemy ended any chance Carter had of winning the election. Carter had lost his fight to free the hostages, who had been held for almost 444 days of his presidency.

Fighting to gain the upper hand in a political battle emerged in the speech Israeli Prime Minister Benjamin Netanyahu gave to the United Nations General Assembly earlier in the week. Before he scaled back his threat to attack Iran before the November 6 election, Netanyahu made one final gesture of defiance against Barack Obama.

Unfortunately for him, his defiance included a decision to unwittingly emulate a movie comedy figure, Wile E. C0yote (shown here) by drawing a cartoon bomb to illustrate to the United Nations General Assembly what Netanyahu believed was line showing how close Iran was to having the capacity to produce a workable nuclear bomb.

Commentators like Richard Silverstein, have shown just how much Netanyahu, with his comic bomb drawing, (at top), looked like Wile E. Coyote  (shown here.) in the 1952 movie cartoon short, Operation: Rabbit.

Prime Minister Netanyahu’s final gesture of defiance may or may not, fare better in history than did Wile E.Coyote in his battle with Bugs Bunny. Politicians are unpredictable, and those that possess a nuclear arsenal, as Netanyahu does, are especially dangerous when they feel trapped.

Meanwhile, there are three presidential debates, and one vice-presidential debate, before the election on November 6. I await with great anticipation, just how the New York Times will cover the first debate Wednesday, October 3. Maybe they will have a fight story that depicts Wile E. Romney getting up from the canvas to score a decisive victory over the champ, Bugs Obama.

The picture at top of Prime Minister Benjamin Netanyahu is from the Boston Globe. It was taken by Richard Drew, of the Associated Press.

From 1972 through 1999, James M. Wall was editor and publisher of the Christian Century magazine, based in Chicago, lllinois. He was a Contributing Editor of the Century from 1999 until July, 2017. He has written this blog, wall writings.me, since it was launched April 27, 2008. If you would like to receive Wall Writings alerts when new postings are added to this site, send a note, saying, Please Add Me, to jameswall8@gmail.com Biography: Journalism was Jim's undergraduate college major at Emory University, Atlanta, Georgia. He has earned two MA degrees, one from Emory, and one from the University of Chicago, both in religion. He is an ordained United Methodist clergy person. He served for two years in the US Air Force, and three additional years in the USAF reserve. While serving on active duty with the Alaskan Command, he reached the rank of first lieutenant. He has worked as a sports writer for both the Atlanta Journal and Constitution, was editor of the United Methodist magazine, Christian Advocate for ten years, and editor and publisher of the Christian Century magazine for 27 years.
View all posts by wallwritings →
This entry was posted in -Movies and politics, Media, Middle East, Middle East Politics, Movies, Netanyahu, Obama, Romney. Bookmark the permalink.

2 Responses to NYT to Obama v. Romney, “let’s you and him fight”