“A Taboo on Telling the Truth About Palestine”

Psalm 2:3 is sung in George Frideric Handel’s Messiah before the arrival of the triumphant Hallelujah chorus, when audiences rise to their feet, following the tradition set by England’s King George II at the Oratorio’s first London performance.

Handel’s Sacred Grand Oratorio, which had its first performance in Dublin, Ireland, on April 17, 1741, has been described as “the most famous piece of sacred music in the English language”.

Recently, while listening to a live performance of the Messiah, I remembered an article by John Pilger (right) which he adapted from his Edward Said Memorial Lecture presented in Adelaide, Australia, September 11.

The Adelaide lectures have been presented annually since 2005 in honor of the late Edward Said, the Palestinian scholar and political activist who was as a major face and voice of Palestine.

I had been thinking about the absence of Christian outrage and action from the institutional Christian church over this summer’s Gaza massacre. Pilger, an Australian-born film-maker and author, who now lives in England, connected Said for me, to Psalm 2:3. He did so with a statement Pilger quotes from Said:

“There is a taboo,” said the visionary Edward Said, “on telling the truth about Palestine and the great destructive force behind Israel. Only when this truth is out can any of us be free.”

Handel chose Psalm 2:3 to deliver this same wisdom in Part Two of his Messiah: “Let us break their bonds asunder, and cast away their yokes from us”

Our refusal to speak and act on the truth about Palestine’s physical and mental bondage imposed by the military might of Israel is a manifestation of our last taboo.

What exactly is this taboo?

Said (left) believed the “great destructive force behind Israel” demands that we honor the taboo against telling the truth about Palestine.

During this Christmas season, what does the Christian church say and do, in its individual and corporate forms, about this bondage?

We sing about angels in Bethlehem, and we thrill to the musicality of the Hallelujah chorus that follows Psalm 2:3 in Handel’s Messiah.

We preach about loving our neighbor, but we say and do nothing to love our Palestinian neighbors enough to speak out and act against the Israeli occupation bondage which our nation defends, endorses and finances.

Bethlehem is not a stage setting for a fairy tale envisioned by Walt Disney. The birthplace of Jesus is a real city surrounded by a gigantic prison wall.

This cannot continue. The time has come when the intimidation and fear must end. Pilger writes,

“For many people, the truth is out now. At last, they know. Those once intimidated into silence can’t look away now. Staring at them from their TV, laptop, phone, is proof of the barbarism of the Israeli state and the great destructive force of its mentor and provider, the United States, the cowardice of European governments, and the collusion of others, such as Canada and Australia, in this epic crime.”

Pilger reminds us that Nelson Mandela called the struggle of Palestine “the greatest moral issue of our time”.

Pilger denounces the “mass murder” in Gaza this past summer, as an act “sponsored by the same godfather in Washington that answered the cries of children in Gaza with more ammunition to kill them”.

The psalmist instructs us that we will remain in bondage to an “epic crime” so long as continue to honor the taboo against telling the truth about Palestine.

Television writers remind us in sci-fi films, “the truth is out there”. True enough, but the psalmist reminds us that the truth of our bondage is part of our daily existence, a bondage that keeps us from smashing down those taboos that keep us blind to the suffering that cries out to be heard.

It is that taboo which keeps us from seeing, as journalist Chris Hedges writes, that the current tangible force of evil that haunts us is a creature of our own making, the Islamic State of Iraq and Syria (ISIS).

“The United States after a decade of war in Iraq pieced together its body parts. We jolted it into life. We bathed it in blood and trauma. And we gave it its intelligence. Its dark and vicious heart of vengeance and war is our heart. It kills as we kill. It tortures as we torture.

It carries out conquest as we carry out conquest. It is building a state driven by hatred for American occupation, a product of the death, horror and destruction we visited on the Middle East.

There is no taboo against speaking of ISIS.  The taboo related to ISIS is its connection to another American creation, the modern state of Israel.

Hedges opens a door into the darkness of our refusal to acknowledge our major role in Israel’s creation myth. He sees ISIS as an emulation of the modern state of Israel.

“ISIS now controls an area the size of Texas. It is erasing the borders established by French and British colonial powers through the 1916 Sykes-Picot Agreement. There is little we can do to stop it.

ISIS, ironically, is perhaps the only example of successful nation-building in the contemporary Middle East, despite the billions of dollars we have squandered in Iraq and Afghanistan.

Its quest for an ethnically pure Sunni state mirrors the quest for a Jewish state eventually carved out of Palestine in 1948.”

Why have we not seen the parallels between the creation of ISIS and the earlier creation of Israel?  The taboo against speaking the truth about Palestine is enforced by our mainstream media, our churches and our political leaders. 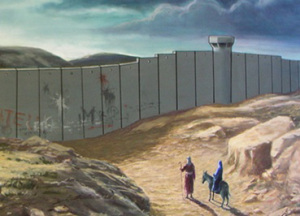 The bondage of the people of Palestine and the attacks by Israel are not limited to Palestinians. As Pilger points out:

“The attack on Gaza was an attack on all of us. The siege of Gaza is a siege of all of us. The denial of justice to Palestinians is a symptom of much of humanity under siege and a warning that the threat of a new world war is growing by the day.”

Hedges, a former New York Times correspondent who was based in Jerusalem, makes the connection between the rise of ISIS and the creation of the modern state of Israel:

“[ISIS] tactics are much like those of the Jewish guerrillas who used violence, terrorism, foreign fighters, clandestine arms shipments and foreign money, along with horrific ethnic cleansing and the massacre of hundreds of Arab civilians, to create Israel.

Antagonistic ISIS and Israeli states, infected by religious fundamentalism, would be irreconcilable neighbors. This is a recipe for apocalyptic warfare. We provided the ingredients.”

We are complicit in the creation of the modern Middle East. By honoring the taboo described by Edward Said, we made and now sustain Israel, not as a democracy which it claims to be, but as a war machine designed to extend the American empire over the bodies of dead children in Gaza and the West Bank.

John Pilger’s documentary film, Palestine is Still the Issue, is distributed in two parts, the first in 1974, the second in 2002. They are both still relevant. Part two is below. It runs 52 minutes.

From 1972 through 1999, James M. Wall was editor and publisher of the Christian Century magazine, based in Chicago, lllinois. He was a Contributing Editor of the Century from 1999 until July, 2017. He has written this blog, wall writings.me, since it was launched April 27, 2008. If you would like to receive Wall Writings alerts when new postings are added to this site, send a note, saying, Please Add Me, to jameswall8@gmail.com Biography: Journalism was Jim's undergraduate college major at Emory University, Atlanta, Georgia. He has earned two MA degrees, one from Emory, and one from the University of Chicago, both in religion. He is an ordained United Methodist clergy person. He served for two years in the US Air Force, and three additional years in the USAF reserve. While serving on active duty with the Alaskan Command, he reached the rank of first lieutenant. He has worked as a sports writer for both the Atlanta Journal and Constitution, was editor of the United Methodist magazine, Christian Advocate for ten years, and editor and publisher of the Christian Century magazine for 27 years.
View all posts by wallwritings →
This entry was posted in Gaza, Human Rights, Israel, Media, Middle East, Middle East Politics, Palestinians, Religious Faith, USA. Bookmark the permalink.

9 Responses to “A Taboo on Telling the Truth About Palestine”