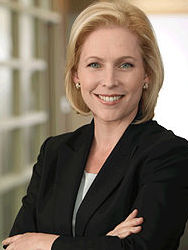 Senator Charles Schumer, Democrat of New York and leader of the pro-Israel forces in the Senate, announced on August 6, that he would oppose President Obama’s effort to gain Congressional support for the P5+1 nuclear deal with Iran.

At the time, Schumer’s move was seen as a major setback for Obama. It did not work out this way. Three weeks later, Schumer has been joined by only one other Democratic senator, Robert Menendez, of New Jersey.

Instead of a rush to join the pro-Israel lobby forces in standing with Israel’s opposition to the deal, the number of Democratic senators who favor the deal is growing.

Kirsten Gillibrand (above), the junior Democratic Senator from New York, came out in favor of the agreement on the same day as Schumer’s announced opposition.

As an indication of how the mood in the Democratic Senate caucus is shifting toward favoring the agreement, Senator Gillibrand was an early supporter of the bill which might be described as the “kill the Iranian nuclear pact“ legislation.

Senator Gillibrand is now an announced supporter of the Iran nuclear agreement.

This past weekend, Senate Minority Leader Harry Reid (D-Nev.) joined Gillibrand, by promising not only to vote in favor of the agreement, but pledging to do “everything in my power to ensure that it stands.”

He has been joined by Michigan Senator Debbie Stabenow, Red State Democratic Senator Claire McCaskill, of Missouri, and Tuesday, Senator Patty Murray of Washington State, announced her support of the deal.

If Reid and Minority Whip Richard Durbin (D-Ill.) can hold their Democratic caucus to fewer than six defections, Republicans will lack the votes to get the disapproval resolution the 60 votes it needs to clear the Senate. That would spare Obama from having to veto it.

“In an analysis for Forward, Nathan Guttman, wrote: ‘Thirteen U.S. Senators is all President Obama needs to ensure that the nuclear deal with Iran does not get derailed by Congress’.”

The pro-Israel forces were targeting a specific 13 Democratic Senators as recently as July 24. The targeted 13 included Senator Schumer, now on the record as opposing, Indiana Senator Joe Donnelly, who has since announced his support of the agreement, and Oregon Senator Ron Wyden (left), whose Jewish parents fled Nazi Germany.

Senator Wyden remains undecided, but Portland House member Earl Blumenauer, a Wyden ally, has announced he would support the Iran deal. Oregon is a liberal state which also may weigh heavily on Wyden.

Gary Peters, junior Democratic Senator from Michigan, also remains undecided. Some reports indicate he is influenced by his Chief of Staff, Eric Feldman, a strong backer of Israel, who came to work for Peters after working for former White House Chief of Staff and Congressman Rahm Emanuel, also a strong pro-Israel politician.

Emanuel, however, has indicated his support for the Iran accord. He says he would have supported it were he still in Congress. Emanuel is now Mayor of Chicago.

A New York Times analysis suggested Senator Peters could be guided to support the deal, by “Michigan Representative Sander Levin of Michigan, the longest-serving Jewish House member [who has] endorsed the agreement”.

Another Jewish House member, Democratic Representative Jerrold Nadler, of New York, has endorsed the deal. As a result, he has received strong “personal attacks on his loyalty to Israel, from the Orthodox community in Borough Park”.

The Democratic caucus in the House is not strong enough to avoid a negative vote on the deal, but a veteran colleague like Nadler, with his strong Jewish credentials, could encourage freshman Michigan Senator Peters to move from undecided to support the agreement.

Congressman Nadler represents a large segment of New York City. His district includes “the largely liberal Upper West Side through conservative Brooklyn neighborhoods of Midwood and Borough Park [and is] said to be the most Jewish congressional district in the country”.

Nadler is the first Democrat from the New York area to support the agreement.

So far, the Republican Senate caucus remains solidly in opposition to the deal. Arizona Republican Senator Jeff Flake had been targeted for support of  the agreement, but he has announced he will vote with his Republican caucus against the deal.

Meanwhile, outside the halls of Congress, public support for the agreement is growing.

A full-page ad in the New York Times ran on Thursday, August 20, signed by former Jewish leaders who support the Iran deal. “Out of concern for Israel”, these leaders say, they are supporting the deal.

The ad begins with a quote from “former Israeli Navy commander and Shin Bet head Ami Ayalon, who said that ‘when it comes to Iran’s nuclear capability, this [deal] is the best option among those actually available to the international community’.”

The Times ad was organized and published by a non-profit organization, No Nukes for Iran Project, a group assumed to be working with a White House team.

A group of 51 religious leaders issued a statement of support this week. Their statement is signed with their names and religious organizations.  They give their reason for support:

“After decades of hostility, the international community has crafted a nuclear accord to limit Iran’s nuclear program and prevent the United States from moving closer toward another devastating war in the Middle East.”

The religious leaders also assert that the agreement “will dramatically shrink and impose unprecedented constraints on Iran’s nuclear program. In exchange, the international community will begin to lift sanctions on Iran. It also establishes the most robust monitoring and inspection regime ever negotiated to verify Iran’s compliance with the restrictions on its nuclear program.”

Politicians who endorse the agreement do so with statements hedged with everlasting love and praise for Israel.

So far, however, it appears that U.S. public’s repulsion from the bullying tactics of Israeli Prime Minister Benjamin Netanyahu and his open participation in our political process, may end up as a part of a growth process in which Americans learn more about Israel’s treatment of Palestinians.

The deadline for a final vote on the agreement has been set in Congress for September 17. It could be close.  The New York Times suggests:

“The last, most important voice might be that of Senator Benjamin L. Cardin of Maryland, the ranking Democrat on the Foreign Relations Committee and a religious Jew with his eye on Israeli opinion.

But Mr. Cardin also tends toward optimism on diplomacy, and many Democrats believe he will come out in favor of the nuclear accord — possibly at the last moment.”

This means the final vote may be so close that the outcome could come down to Senator Cardin, “a religious Jew with his eye on Israeli opinion”. Reinhold Niebuhr, who wrote so eloquently of The Irony of American History, must be enjoying this current chapter.

From 1972 through 1999, James M. Wall was editor and publisher of the Christian Century magazine, based in Chicago, lllinois. He was a Contributing Editor of the Century from 1999 until July, 2017. He has written this blog, wall writings.me, since it was launched April 27, 2008. If you would like to receive Wall Writings alerts when new postings are added to this site, send a note, saying, Please Add Me, to jameswall8@gmail.com Biography: Journalism was Jim's undergraduate college major at Emory University, Atlanta, Georgia. He has earned two MA degrees, one from Emory, and one from the University of Chicago, both in religion. He is an ordained United Methodist clergy person. He served for two years in the US Air Force, and three additional years in the USAF reserve. While serving on active duty with the Alaskan Command, he reached the rank of first lieutenant. He has worked as a sports writer for both the Atlanta Journal and Constitution, was editor of the United Methodist magazine, Christian Advocate for ten years, and editor and publisher of the Christian Century magazine for 27 years.
View all posts by wallwritings →
This entry was posted in Iran, Israel, Middle East Politics, Netanyahu, Obama. Bookmark the permalink.