Posted on September 3, 2015 by wallwritings

One day later, Senator Cory A. Booker (D-NJ) padded Obama’s veto-proof party vote with his support of the accord. With Mikulski and Booker on board, Obama now had 35 Senators who will vote to defeat a Republican-backed resolution of disapproval.

“Three more Democratic senators announced their endorsement of the Iran nuclear pact [Tuesday], creating a 41-vote firewall of support, but it remains unclear if Democrats will use their numbers to filibuster and block a vote on a GOP-backed resolution of disapproval.

Ron Wyden of Oregon, Richard Blumenthal of Connecticut and Gary Peters of Michigan announced they will back the deal. President Obama has all but locked up support to sustain a veto of the disapproval resolution in both the House and Senate, but the Democratic senators now backing the president could deny opponents the 60-vote threshold needed to advance the measure to the White House.”

In his statement, which echoes other statements made with nervous glances toward AIPAC, Booker said, “Backing away from the nuclear pact at this point would leave the United States and its allies with few options to restrain Iran’s ambitions.”

One by one, as the days dwindled down to a precious few before a final vote in mid-September, Democratic Senators are stepping forward to endorse Obama’s decision to choose diplomacy over military action.

The White House worked with Senate and House Democratic leaders to orchestrate this drip-by-drip destruction of Netanyahu’s plan to control U.S. foreign policy.

The New York Times described a meeting between undecided Democratic Senators and senior diplomats from Britain, China, France, Germany and Russia. The meeting occurred before the Senate left for its August break.

The diplomats delivered a blunt message to the wavering Senators. The nuclear agreement with Iran was the best the Senate could expect.  Furthermore, the five world powers had no intention of returning to the negotiating table.

So much for the AIPAC demand for a “better deal”. The diplomats unanimously agreed in their meeting with the Senators, “this is as good a deal as you could get and we are moving ahead with it.”

“a passionate attachment of one nation for another produces a variety of evils.”

Washington continued: “Sympathy for the favorite nation, facilitating the illusion of an imaginary common interest in cases where no real common interest exists, and infusing into one the enmities of the other, betrays the former into a participation in the quarrels and wars of the latter without adequate inducement or justification”.

These are words for reflection by both Democrats and Republicans when the Congressional vote to reject the agreement reaches both chambers before September 17.

In the same week that Prime Minister Netanyahu lost his battle with Obama, Israel received a second serious blow to its already sagging world image. A video of an Israel soldier trying to arrest a 12-year-old Palestinian boy with a cast on his arm during a protest, went viral.

The boy resisted. His family rushed to free him from the soldier’s grip. One teenage girl pounded on the soldier. The soldier was rescued by another soldier who dragged him away.

When media reports swept across international social media, millions of viewers viewed the military occupation in action.  The viewers also saw how furiously Palestinians fight to protect their young.

The Jerusalem pro-government Times of Israel described what happened.

“Their faces covered in bandanas, a group of adolescent Palestinian boys led the march from the West Bank Palestinian village of Nabi Saleh toward the neighboring Jewish settlement of Halamish. Behind them was a large crowd of villagers — some older and some younger — activists and members of the media. Some were waving Palestinian flags; some were holding gas masks; many had cameras.

Down the road, Israeli Defense Forces soldiers awaited them, as they do every Friday, in an effort to prevent the demonstration from reaching Halamish and the main road. 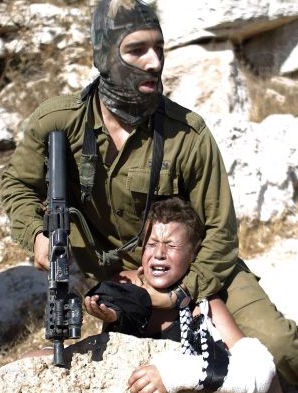 This routine protest against settlement construction in Nabi Saleh set the stage for an incident that was caught on video and made news headlines worldwide: Palestinian women and children preventing an IDF soldier from arresting 12-year-old Muhammad Tamimi, who was suspected of stone-throwing. The altercation left the soldier with light wounds, and Israel with a black eye on the world stage.”

An Haaretz editorial expressed its anger and frustration over a scene of an occupation soldier holding a 12-year-old Palestinian child in a chokehold.

“The scene from Nabi Saleh encapsulates all the insanity, injustice, stupidity, purposelessness and pointlessness of the occupation.”

And let the people say, Amen.

The picture of President Obama and Prime Minister Benjamin Netanyahu is a Reuters picture from Mondoweiss. The video of the Nabi Saleh encounter is from the Arabic site, www. RoyaNews. The picture of the soldier holding the child appeared in Ha’aretz. It is by Reuters.

From 1972 through 1999, James M. Wall was editor and publisher of the Christian Century magazine, based in Chicago, lllinois. He was a Contributing Editor of the Century from 1999 until July, 2017. He has written this blog, wall writings.me, since it was launched April 27, 2008. If you would like to receive Wall Writings alerts when new postings are added to this site, send a note, saying, Please Add Me, to jameswall8@gmail.com Biography: Journalism was Jim's undergraduate college major at Emory University, Atlanta, Georgia. He has earned two MA degrees, one from Emory, and one from the University of Chicago, both in religion. He is an ordained United Methodist clergy person. He served for two years in the US Air Force, and three additional years in the USAF reserve. While serving on active duty with the Alaskan Command, he reached the rank of first lieutenant. He has worked as a sports writer for both the Atlanta Journal and Constitution, was editor of the United Methodist magazine, Christian Advocate for ten years, and editor and publisher of the Christian Century magazine for 27 years.
View all posts by wallwritings →
This entry was posted in Iran, Israel, Media, Middle East, Middle East Politics, Netanyahu, Obama, Palestinians. Bookmark the permalink.

8 Responses to Obama Defeats Netanyahu In Iran Accord Battle