It did not take long for a group of opportunistic U.S. Governors to respond to the horrors of the Paris bombings.

They did so with racist, religiously bigoted responses against Muslims.

Their responses were degrading to their collective state offices, and hateful to a major world religion. They also display a collective naked ignorance of the fact that governors have absolutely nothing to do with U.S. immigration policy.

Time reports the reactions of these governors:

“In the wake of the attacks on Paris, a slew of American governors have expressed opposition to President Obama’s plan to allow 10,000 Syrian refugees to come to the U.S. Some states (like Alabama and Texas) say they would not allow these immigrants into their states; some (like Massachusetts and Nevada) have requested more information from the federal government before they make a decision; and others (like Idaho and North Carolina) land in the middle, saying they oppose the idea but stopping short of refusing to receive refugees. On the other end of the spectrum, a handful of governors have pledged to accept Syrian migrants.”

Think Progress delivers the ignorance memo to the governors:

“There is no lawful means that permits a state government to dictate immigration policy to the president in this way. As the Supreme Court explained in Hines v. Davidowitz, ‘the supremacy of the national power in the general field of foreign affairs, including power over immigration, naturalization and deportation, is made clear by the Constitution.” States do not get to overrule the federal government on matters such as this one.”

Did the governors miss examining Hines v. Davidowitz in their collective rush to join the anti-Muslim lynch mobs?

Faced with a crucial test of leadership, many of the nation’s governors failed. Take note of their names and determine if this is leadership, or flashbacks to the years of the Ku Klux Klan. 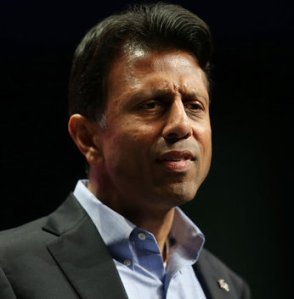 Among the names is Louisiana Gov. Bobby Jindal, who has just withdrawn as a Republican presidential candidate. (Pictured)

Governor Jindal issued an executive order on Monday authorizing his government “to utilize all lawful means” to block Syrian refugees from resettling in the state. He also instructed and authorized state police “to utilize all lawful means to monitor and avert threats within the State of Louisiana” if notified of Syrian refugees already living in the state.

Responses from leaders of states in “the land of the free and the home of the brave” were echoed in this summary from Huffington Post:

“More than half of the nation’s governors have called on the U.S. to stop admitting Syrian refugees, most of them promising to do everything in their power to prevent them from entering their states.

“While most pledged to block Syrian refugees from entering their states, Florida Gov. Rick Scott said he doesn’t think he has the authority to keep the federal government from resettling them. Hassan called for the U.S. to stop admitting Syrian refugees entirely, but her spokesman said she could not block their resettlement in New Hampshire. Oklahoma Gov. Mary Fallin similarly said there should be a moratorium on admitting Syrian refugees but stopped short of saying her state would try to reject them.”

“Instead of leading their citizens during an ugly time of suffering and death, these governors chose to take political advantage of a tragic series of events by displaying their own ignorance, bigotry to deceive, knowingly or not, those they were chosen to lead.”

Unfortunately, this isn’t anything new. Only this time the governors have moved to the front of the lynch mobs.

“Muslim-blaming is a now expected reaction to any terrorism attack in the U.S. or abroad. Even though less than 2 percent of all terrorist attacks over the past five years have been “religiously motivated,” and only 6 percent of all terrorism attacks in the U.S. between 1980 and 2005 were committed by Muslims, a few events — 9/11, in particular — have spread a healthy dose of Islamophobia across the country over the past few decades.

“At the same time, the population of Muslims in the U.S. has grown to more than 2.6 million. Many of them arrived in North America hoping to escape the discrimination and hate already brewing in their home country, only to be met with rampant discrimination.”

Islamophobia greets them in their new homeland, whether they have been here for generations, or for a few years.

“Researchers are just beginning to explore the kind of toll that Islamophobia can take on the mental and physical health of Muslim-Americans — and it’s unsurprisingly harsh.

“Studies have shown that many Muslims not only experience religious discrimination in their daily lives, but are fully aware of their devalued position in society,” writes a group of Norwegian psychology professors in a 2012 study. Their own study found that perceived Islamophobia has a “distinct effect on Muslim minorities’ health and identification.”

“Of the few studies on Muslim health that exist, most identified that daily, repetitive harassment as the biggest factor contributing to long-term mental health issues in Muslim populations.”

The governors have allowed the murderous conduct of an organized terror organization to serve as an excuse to condemn all Muslims as a danger.

Bigotry is far reaching into the entrails of a land that has always harbored the disease of racial and religious bigotry.  It is now officially out in the open in the sickening images of governors fighting to join the mob.

Western Muslim communities are fast becoming the target of violent and racist threats.

“The U.S. Department of Justice (DOJ) is investigating several threats against mosques as potential hate crimes, according to the advocacy group the Council on American-Islamic Relations (CAIR).

“CAIR’s Florida chapter reported two separate calls to mosques in the state over the past several days that threaten to bomb or shoot up the places of worship. For instance, just hours after the attacks in France on Friday night, a mosque in St. Petersburg, Florida received a voicemail from a man who said he planned to shoot Muslims, including children.. . .

“In Orange County, Florida, a Muslim family found three bullet holes on the side of their home this weekend. According to the incident report, they told the police they suspect people are retaliating against them in the aftermath of the Paris attacks. Mahmoud Elmasri and his family were not home at the time because they were “out painting pictures of peace for the victims of the attacks in France,” the Orlando Sentinel reports.

“In Michigan, police have been investigating an individual who posted a threatening message to Muslims on Twitter after news broke that ISIS had claimed responsibility for the violence in France. “Dearborn, MI has the highest Muslim population in the United States. Let’s [expletive] that place up and send a message to ISIS. We’re coming,” the individual tweeted on Saturday night. Cops in Dearborn say the person is ‘no longer a threat’.

“CAIR says these threats ‘fit a pattern of increased hate-motivated crimes and bias incidents nationwide targeting persons and property associated, or perceived to be associated, with Islam and the American Muslim community’.

The Obama administration plans to admit 10,000 Syrian refugees this fiscal year, all of whom will undergo security screenings that typically take 18 to 24 months.

President Obama has sharply criticized governors and citizens alike for this response to Syrians seeking safety in the U.S., saying it is ‘shameful’ to reject Muslim refugees and noting that Americans “don’t have religious tests to our compassion.”

In the picture above, Imam Suleimaan Hamed, the leader of the Atlanta Masjid of Al Islam mosque, walks through the mosque, in Atlanta. It is an AP photo by Branden Camp. The picture of Governor Jindal is a Getty photo by Joe Raedle.

From 1972 through 1999, James M. Wall was editor and publisher of the Christian Century magazine, based in Chicago, lllinois. He was a Contributing Editor of the Century from 1999 until July, 2017. He has written this blog, wall writings.me, since it was launched April 27, 2008. If you would like to receive Wall Writings alerts when new postings are added to this site, send a note, saying, Please Add Me, to jameswall8@gmail.com Biography: Journalism was Jim's undergraduate college major at Emory University, Atlanta, Georgia. He has earned two MA degrees, one from Emory, and one from the University of Chicago, both in religion. He is an ordained United Methodist clergy person. He served for two years in the US Air Force, and three additional years in the USAF reserve. While serving on active duty with the Alaskan Command, he reached the rank of first lieutenant. He has worked as a sports writer for both the Atlanta Journal and Constitution, was editor of the United Methodist magazine, Christian Advocate for ten years, and editor and publisher of the Christian Century magazine for 27 years. James M Wall died March 22, 2021 at age 92. His family appreciates all of his readers, even those who may have disagreed with his well-informed writings.
View all posts by wallwritings →
This entry was posted in Middle East Politics, Obama, Religious Faith. Bookmark the permalink.